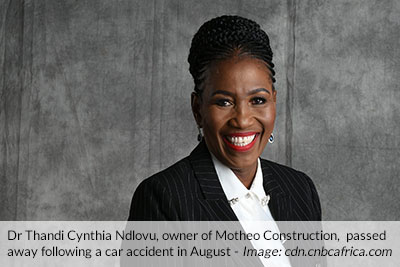 Ndlovu obtained a Bachelor of Science in Human Biology from the University of Zambia in 1984 and obtained an MBChB from the same university in 1991. She worked as a medical practitioner in private practice prior to 1994, and dedicated herself to the built environment through Motheo Construction, the company she established in 1996. She was the founder and executive chairman of the Motheo Group of companies, and the managing director of Motheo Construction. By 2011 the Motheo Group had delivered over 30 000 serviced sites and over 50 000 affordable housing units spanning six provinces, translating into over R1.2 billion worth of affordable housing all across South Africa.

“For many years we were both very active in South African Women in Construction and Built Environment ,” said Eunice Forbes – the first woman to become president of both Master Builders South Africa. “The fight and struggle was always the same: the admission of women into construction and transformation within the sector. She had such a presence – a tangible aurora about her – when she entered a room. Her loss to Sawic is immeasurable.

In her position as one of the founding members and deputy chairperson of South African Women in Dialogue, chaired at the time by Dr. Brigalia Bam, she co-facilitated the SAWID/Democratic Republic of Congo Peace Dialogue in March 2003 and the South Africa/Burundi Peace Dialogue in July 2004. She was the leader of a delegation of South African women from different political parties attending the 2007 Women in Politics Conference in Juba, South Sudan.

Ndlovu was born in Soweto, where she attended Orlando High School, and where she became a founding member of the Student’s Christian Movement. At the time of the Soweto Student uprising in 1976, she was serving as the administrative secretary of the student representative council at the University of Fort Hare, where the political repression at the time forced her to abandon her Bachelor of Science degree. She spent the next few years being trained within the ranks of Umkhonto we Sizwe, the military wing of the ANC, and during 1976 she was posted with other cadres to Novo Catengue, a military training camp in the South of Angola.

Dr T was not only an activist for the emancipation of women in construction but she was a voice of reason and a sounding board to many leaders including politicians on matters that speak to the transformation agenda of business in the country. She was also a medical practitioner and served within MK as a senior political commissioner, charged with a literacy and education programme, and as a military commander. Although she had not yet trained as a doctor, she served as medical officer, and in 1978 she was sent to the then Union of Soviet Socialist Republics (USSR) where she obtained further training. Upon the completion of her training, she was sent to the ANC headquarters in Lusaka where, amongst many other positions, she served as administrative secretary of the Women’s Section.