Construction sector to discuss dangers of cannabis on building sites

The South African construction sector – concerned about the potential effects of the legalisation of cannabis on health and safety in the industry – has organised a special seminar next week to deal with the issue.

“Consequences of Cannabis Use in the Workplace” will be presented by Master Builders Association (MBA) North in collaboration with the SA Forum of Civil Engineering Contractors (SAFCEC) together with the Institute for Work at Height (IWH) in Midrand on Tuesday (Nov 27).

Mohau Mphomela, executive director of MBA North, says the seminar aims to convince construction industry members to apply the current restrictions contained in the Department of Labour’s Occupational Health & Safety Act’s General Safety Regulations 2A which state that an employer shall not permit any person who appears tobe under the influence of intoxicating liquor or drugs to enter or remain at a workplace.

“Drugs can affect the brain and the body in many ways. Cannabis can, for example, alter the way a person thinks, perceives and feels, and this can lead to impaired judgement or concentration. Drug abuse can also cause the neglect of general health and safety measures to adversely influence performance at work, or even outside the workplace.

Drug misuse can be a serious problem not only for the misuser but also for their families, work, communities, other road users and co-workers. The cost of incidents, injuries, absenteeism, as well as loss of productivity are some risks that have be considered;’ Mphomela states. He says consequences of the misuse of a drug such as cannabis include impaired concentration, sudden mood changes, poor time-keeping, irritability or aggression, fluctuating energy, dishonesty and theft, absenteeism, memory problems, and anxiety. Furthermore, the duration of the drug in the blood stream differs from person to person.

Adequate testing and screening would detect remaining traces of the drug in the blood stream. “lt is a company’s prerogative on how it wishes to handle traces found of historic drug usage, but intoxication should not be tolerated as already decreed in the Department of Labour’s General Safety Regulations 2A;’ Mphomela stresses.

Recommended actions to counter the threat of employees that are under the influence of cannabis include consulting with “experts”, health and safety representatives, and workers’ unions to get the füll support of staff. Developing new policies or reviewing existing policies and communicating these policies to all employees and other stakeholders are also recommended.

lt is also important that competent persons should present training and awareness programmes on the effects, signs, symptoms, consequences and addiction. For drug screening and testing, a “fair and transparent process” should be in force. “Rehabilitation programmes are also recommended but employees with a drug problem should have the same rights to confidentiality and support as for any other medical or psychological condition.

Disciplinary action should be taken as a last resort – and the process must be fair;’ Mphomela adds. The workshop, “Consequences of Cannabis Use in the Workplace” will be held at the Bytes Conference Centre in Midrand on November 27 from 8.30 to 1pm. 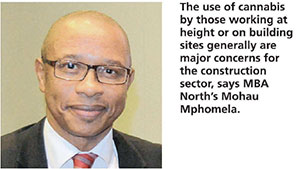