Every year the MBA North president recognises a member who has dedicated time and resources to the Association and embodied the Vision and Mission of the Association through their service. The 2017 President’s award went to SNS Plumbing Owner, Sello Mokawane. During an interview with MBA North, this is what Mr Mokawane had to say: 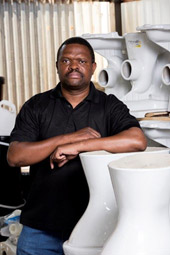 Sello Mokawane, like others, turned to active participation in the MBA North to address the many challenges of operating his small but growing company, SNS Plumbing and Project Services (www.snsprojects.co.za)

He had worked as a Regional Manager: Ward Governance for the Johannesburg Metropolitan Council for 18 years, having studied Project Management, Politics and Business. It was time for a change of career, even though it was to be incredibly challenging. In 2004, he entered the Building Industry with his former amateur Molapo United soccer teammate, Sidwell Matlala, a qualified plumber by profession. And so SNS!

They started out with after hour’s work, in the evening, over weekends and on public holidays, until they began to get some attraction. Sello indicates they were essentially flying by the seat of their pants and it was difficult to make real headway. Finances were very tight, corners were being cut, and it was seriously stressful. But not anymore thanks to the MBA North.

“My greatest education came from the School of Hard Knocks, trying, failing and trying again is what has best qualified me for the position I am in today.” In plumbing you need to learn everything about creating advantage. The need to address shortfalls and acquire new broader skills, not just to stay in business, but to develop and grow their operation, motivated Sello to become a member of the Master Builders Association in 2011, and then he made everything that the MBA North offers work for him.

The prime aim of the Master Builders Association is to develop its members. It has become the umbrella under which SNS operates. The MBA introduced and nourished the right principles and objectives to achieve not just sustainability, but steady growth. The company tapped straight into the training and workshops in safety and regulations, etc., that are regularly conducted and in 2016 he completed the MBA North Small Builder’s Development Course. It has enabled them to now readily comply with all legislation and all authorities thereto, including for example SARS. The training provided has given stress-relieving re-assurance to the running of the company and freed Sello to develop their business. And SNS has grown six fold! They now operate a large number of teams with a fleet of vehicles, and with the systems that they have set in place, and an interactive website. They can now respond to calls for new work immediately and complete them without any problems.

Sello really values how the MBA North helped him to become a better businessman with the most astute business principles and he places high value on the exceptional networking opportunities it brings!! He has now taken his membership and participation a step further by joining the MBA North EXCO. SNS has also found value, as plumbers and water-proofers being a member of the, Waterproofing Association Gauteng, the Plumbing Industry Registration Board, and the Institution of Plumbing South Africa to which he was recently nominated as an EXCO member.

He highlights that the best and honest way to develop and grow your business is to join the Master Builders Association “as it covers all the corners of legislation, training, safety, networking and information and particular acts and tenders both public and private”, and moreover to participate fully.

SNS offers the full range of roof leaks, general construction and plumbing services. Sello Mokawane will welcome your call on 082 683 8516 or at info@snsprojects.co.za to discuss whatever you need done to bring your project to fruition.